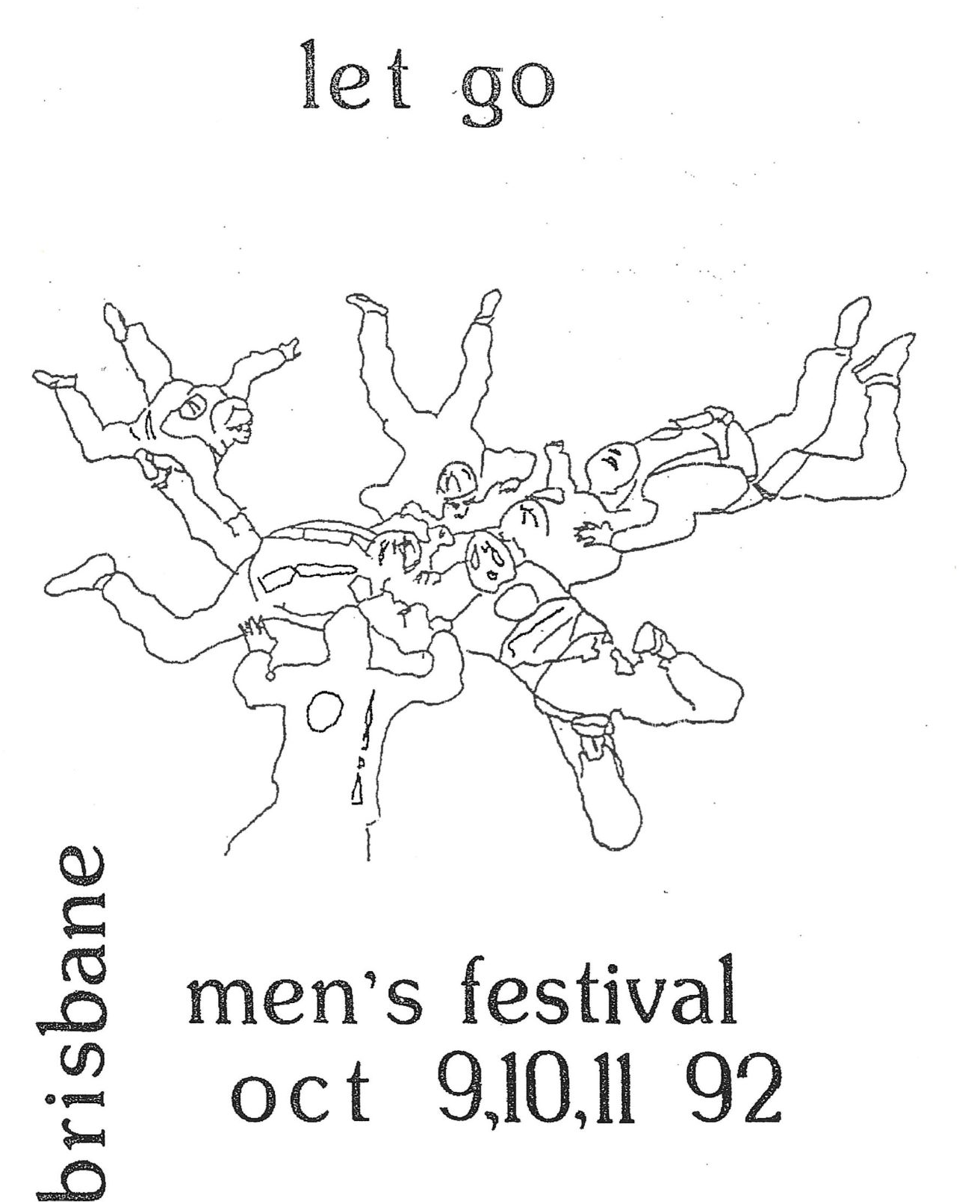 With this prompting, Kerry Davison instigated a lunchtime meeting at the Normanby Hotel in late March 1992. About half a dozen men, mostly from BMG, attended to discuss the prospect of a MeNergy Festival for 1992. There was enough interest aroused to form a Brisbane Men’s Festival (BMF) organising committee. In a short time, Kerry moved away for work and others fell by the wayside leaving Trevor Ozanne and Paul Harris to tote the load. Additionally, the seed money promised by SMF was never seen.

Fortunately, Paul had attended the SMF on one occasion thus had some insight as to what went on. Very soon they had booked a venue at the Uniting Church Camp Constable at Mt Glorious west of Brisbane, a cook and a weekend date in October 1992. The first BMF was under way.

Existing networks of counsellors and contacts engaged with men from BMG, Brisbane Central Men’s Group, ATOM, MATE, SMERI, Journeymen and MASA with the result of 36 attendees met, on the weekend of the October full moon, to take a risk, gather together and explore themselves with the theme of Let Go. These men found their way from Brisbane, Gold Coast, Sunshine Coast, Toowoomba and northern NSW.

Knowing they were breaking new ground in the SE Queensland region the organisers answered the question What is a Men’s festival as follows:

It’s an opportunity to celebrate being a man, with other men, in a friendly, non-judgemental environment, in the midst of the bush – unencumbered by the outside world. A chance to share ideas about your own journey, and to explore a range of masculine role models.

Along the lines of SMF there was no pre-arranged schedule. After a welcoming meal Tom Laffan stood with the butcher’s paper and asked, “well men, what are we going to do?” An eclectic array of offerings was the result, including:

Tony Verner arranged for Phil Ryan, from Mary Ryan Book Store in Paddington, to provide an extensive array of literature of the Men’s Movement for perusal and purchase. This was widely appreciated and supported.

Paul and Trevor breathed sighs of relief at the ensuing profit of $600 which prompted Trevor to ask on Sunday afternoon: what will we do with the profit? The assembled men responded with put it to next time! Thus, the Sunday afternoon plenary session proved to be highly significant where the seeds of future gatherings were to be sown.

What was memorable about the festival was: the talent among the men leading the workshop sessions, the ease of the agenda setting on Friday night, men making group decisions in non-hierarchical ways, the personal sharing, new friendships, the networking, the magnificent setting. One man said it was like his childhood at the “Ekka” (Brisbane’s annual show) where he was able to collect a range of new experiences for his “sample bag”. The secret of the weekend’s success seemed to be the shared enthusiasm for the concept and the acceptance of each other’s journey.

Rod Smith (from SMERI) wrote for the Sunshine Coast Sunday newspaper of October 19, 1992:

Individuals gained insights and understanding of themselves through the process of putting their trust and vulnerability on the line. They enhanced their relationships with themselves, formed bonds and links, established networks and reinforced the value of males being with males. A very powerful and potent weekend indeed with the commitment and promise of more to come.

I wrote in my diary after the Festival that “I’d learnt to love men a little more, and that it would be a continuing process for me. This would help me, as a man, to love myself more, and to love women better”.