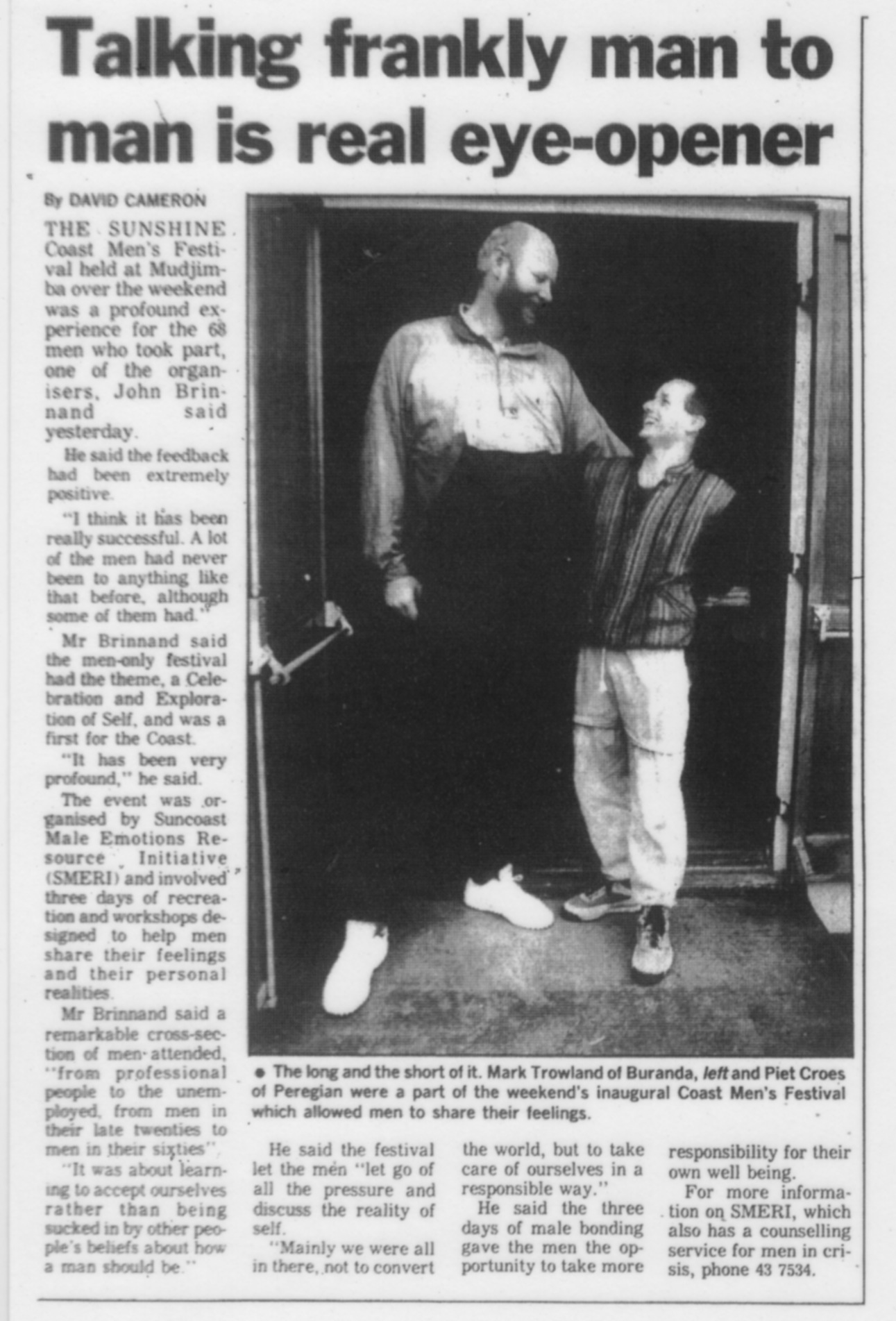 From small beginnings to a nation-wide mens movement

Over twenty years ago, a small group of men on the Sunshine Coast observed how many men often became overwhelmed by the emotional demands that the ordinary crises of life place on them.

Because they believed that other men could help, they set up a phone support service that men could call and named it SMERI (Sunshine Coast Men’s Emotional Resource Initiative). They put the word out, men called and the support team listened. When the phone bills came in, they paid them.

In 1993, both the men who had been answering the phone and many of the men who had called in seeking support decided it was time to meet face-to-face at a weekend gathering. The invitation was open and passed from mate to mate, also reaching men in Brisbane and on the Gold Coast.

Great friendships were born at this first gathering and at the second gathering in 1994, several men believed they could copy what SMERI was doing for the men of Brisbane. Amazingly, they were up and running in just 4 weeks. These men had their own jobs and families but still found the time, money and skills to coordinate a phone line, a phone book listing and a roster of men who could answer calls 24/7. They also found qualified counsellors and professionals who could teach volunteers the skills needed to listen and support the men who called in.

In 1994 men on the Gold Coast began their own annual weekend gathering, called the Manhood Gathering – and with the slim proceeds from their first weekend decided to also run a local helpline. They were able to get training and guidance from the men in Brisbane and started taking calls in 1995.

Despite the continuing success of the men’s phone lines which ran for six years in Brisbane, the Gold Coast and the Sunshine Coast, the Queensland Government showed no interest in supporting the service or in devising programs to tackle the health issues that disproportionately affect men and caused our volunteers so much concern.

The costs of running the phone lines did not decrease as time went on. Neither did the energy and time required to recruit volunteers, train them and to manage the roster. The Brisbane phone line recorded over 18,000 calls in the six years it ran, building up a unique survey of men in need of support – but this information has still been of little interest to government.

Over the years, many professionals have donated time and expertise to train the volunteers for these services. Renowned family psychologist Steve Biddulph published his acclaimed book Raising Boys in 1997 and generously gave both his name as patron to the Gold Coast phone line, and made a donation from the proceeds of his book launch on the Gold Coast.

Manshine 2007 brochureOver 20 years, the Sunshine Coast and Gold Coast gatherings have evolved greatly. Both now attract well over 120 men – including new-comers and old hands. The early gatherings were so small that no organisation was need and participants decided when they met what they would do with the weekend. As the gatherings grew, various traditions and activities also grew as they were found to ensure all men were welcomed and arrangements like food and bed were taken care of smoothly!

What is remarkable is that in the face of these demands for structure and organisation, no distance has grown up between the men attending. To put it another way, there are no “leaders” at a men’s gathering. There are men who know how things work more than the newcomers but there are few roles, titles or initiations. First-time men are just as important and honoured as our returning men and Elders.

It is a cliché that every man has a story to tell, but it is hard to find a place in this world where the cliché is taken seriously enough that anyone will actually stop to listen to these stories. Men’s gatherings are committed to being such a sacred place. They are remarkable also in how little they ask you to believe. There is no religion or spirituality inherent in a men’s gathering – other than the acceptance that some men will be religious or spiritual and that this is a part of their story and who they are.

Realising that the annual weekend gatherings were growing in popularity and able to return a reliable (if not stellar) profit, the idea was born that men’s groups — the small groups of concerned mates that had first initiated the men’s gatherings – could themselves be replicated. Surplus from the annual gatherings could be used to show new men what smaller men’s groups could do and then send them out into the world as self-sustaining and self-supporting.

As a result, Common Ground men’s groups have proved remarkably successful over the following years. Over 800 men have attended a Common Ground group in south-east Queensland and many of those men continue to meet weekly or fortnightly with the men they first met in a Common Ground program.

By 2009 news of the annual gatherings in South-East Queensland had spread. Men from Cairns to Weipa, Tasmania and Perth knew of or had attended the gatherings and on returning home they talked about this men’s movement with their mates. In 2009 men in Cairns held their first annual weekend in the Far North, based on the experience they had gained in South-East Queensland and funding assistance from Mens Wellbeing.

In 2010, men from Kangaroo Valley and Berry on the NSW South Coast did the same. In 2012, men in Melbourne followed also. As the word spreads, Mens Wellbeing helps new members organise Common Ground Mens groups so that they now run in Cairns, the Sunshine Coast, Mitchelton and Mt Gravatt in Brisbane, the Gold Coast, Byron Bay, Berry, Canberra, and Melbourne.