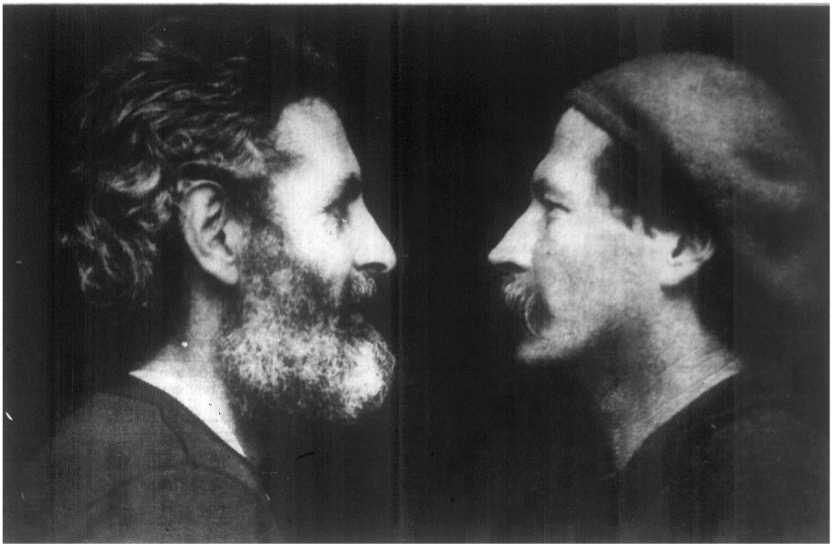 Attending his first ever men’s gathering, Rod Smith (SMERI), was so impressed at what happened at the BMF he boldly declared on the final afternoon that there would be a men’s gathering on the Sunshine Coast next year. John Brinnand (also a SMERI member) later readily agreed and they proceeded with enthusiasm to make it happen.

The first Sunshine Coast Men’s Festival (SCMF) took place at the Mudjimba Apex Camp on the weekend of July 9-11, 1993, under the auspice of SMERI. The 68 men in attendance represented a cross-section from professional to unemployed and from late twenties to sixties. Butcher’s paper was utilised to format the program with the theme of A Celebration and Exploration of Self. Three days of male bonding ensued giving men an opportunity to take more responsibility for their own wellbeing through sharing their feelings and their personal realities.

Proceeds from this event went to support the operations of SMERI.

Rod Smith (L) and John Brinnand (R) sharing face to face at the first Sunshine Coast Men’s Festival.
Photo appeared in Sunshine Coast Weekly on July 14 1993 with a heading of “Coast men get to know themselves”.

A similar group took on organising the event for the following year. Ongoing festivals continued to be supported by SMERI until 1996.

For a number of years the custodianship of the following year’s festival was taken by one man who assembled his own team with the event often taking on a flavour promoted by the custodian. According to Rudran Brannock:

One man picked up the stick and was given a cheque for $3000 by the former stick holder, told to form a committee and bring home the next festival … and to pass on $3000 to the next stick holder … very empowering and challenging.

In later years a future organising committee has been formed by men coming forward at the completion of a festival to take the staff.

There is a story that two men paddled surfboards to Mudjimba Island on the Sunshine Coast to retrieve a piece of wood which has become the ceremonial festival staff for the Manshine gathering. It is not known who these men were though Rudran Brannock confirms he was not one of them. The base in which the staff sits was provided by Terry Bishop who had it cut by Maleny timber artisans. Over time the staff has been decorated, undecorated and redecorated by the various organising committees.

In 2000 the 8th Annual Sunshine Coast Men’s Festival was renamed Manshine under the stewardship of Rudran Brannock. The new name imbued the notion of “man” (obvious) and “shine” for both spiritual nature and the Sunshine Coast. The organising group decided to change the nature of the festival along with giving it a new name. Rather than a freestyle method of a whiteboard list of workshops that year there were half invited facilitators and half freestyle workshops. This approach has further evolved to a prepared program of workshops provided through invitation to experienced facilitators.

It is of great significance to note that the SCMF/Manshine operated in its own right until 2004 when it came under the umbrella of Men’s Health and Wellbeing Association (Qld) with a united social and political voice for men and insurance issues being the guiding forces.

A testament to the value of the Manshine gathering is evidenced in a poem (author unknown) printed in the Mentor Summer 2007, “Manshine Tells a Good Story”:

Did you hear the story
about that group of blokes
in a faraway downunder land?
They get together, year after year
to explore the story
of what it means to be a man
in a world where meaning
is precious like gold

Did you hear about them?
they come together to remember
the men they are on the inside
and the playfulness and laughter
that comes naturally
to men being true to who they are

Did you hear that story?
it’s a powerful story
it’s the story of Manshine